Getaround’s zero-emission pledge is the next step in a longstanding commitment to sustainable mobility for all, through car sharing

This week, Getaround announced a major commitment toward sustainability by pledging to devote the entirety of our leading global digital car sharing marketplace to emission-free vehicles. Starting in 2030, all new cars admitted to the platform must be an electric or green vehicle, and over the next ten years, cars with tailpipe emissions will be phased out, making every car on Getaround electric by 2040.

This announcement represents a deepening commitment toward reducing harmful greenhouse gas emissions around the world. It’s also a continuation of Getaround’s global mission to make cities and communities more sustainable through car sharing.

Getaround was founded in 2009, in part as a solution to car overpopulation. Our founders saw a world in which roughly 1 billion cars sat unused for 22 hours each day, wasting about 30 billion car hours. When not in use, they were just taking up space, and when they were in use (all at the same time) many were older, inefficiently using up resources for a longer period of time, and proving to be detrimental to the environment.

So, as we look ahead to 2040 and prepare to make zero emissions a reality over the next two decades, let’s also take a moment to look back on the past decade of Getaround. See how our car sharing marketplace of guests and hosts have joined us in doing our part for the environment:

Opening up the road

Today, automobile congestion is at an all-time high. In cities such as Denver, vehicles are traveling 15 percent more miles than they ever had before the pandemic. And, although traffic numbers decreased nationwide during 2020, Denver commuters still reported spending 24 hours in traffic that year – among the nation’s highest rates.

Car sharing with Getaround is a way for everyone to help cut down on the growing number of single-owner, single-use vehicles that crowd highways and pollute the air.

Car sharing also means reduced greenhouse gas emissions. 100 million fewer cars on the road would mean roughly 1 trillion pounds of CO2 emissions prevented from entering the atmosphere. But in the years since Getaround was founded, the data collected around the relationship between car sharing and reduced emissions is undeniably encouraging.

A 2020 study conducted by Leiden University found that, in three international markets where car sharing had been introduced (The Netherlands, the San Francisco Bay Area, and Calgary), mobility-related greenhouse gas emissions saw a significant decline — from 67 percent to as low as 3 percent — when compared to previous impact assessments measured before the proliferation of car sharing.

Studies like this one from the University of California, Berkeley, show that switching from individual car ownership to carsharing as the primary mode of transportation can reduce a single household’s carbon footprint by up to 40 percent.

The typical personal-use car actually sits unused for 95 percent of its lifetime, meaning that for more than 22 hours of each day, most cars are not out on the road, but parked — and taking up valuable space in our cities, both along the curb and in sprawling and multiplying parking structures all around the world.

It has been estimated that, in the United States alone, there are up to 2 billion parking spots for these mostly-dormant vehicles. In Philadelphia, there are nearly four parking spots per household according to a recent study, and in some cities the ratio of parking spots to households is as high as 27 to 1. This is all valuable real estate and critical urban land that could instead be devoted to housing, walkable small business, or even green space within cities all around the world.

But, in order to begin reusing all that space, the cars that are currently taking it up need to be shared, used, and driven — spending more time on the road and less time idle.

Another way that car sharing can help to reduce greenhouse gas emissions is what one study in Vancouver has dubbed the “New Car Factor:” Higher utilization rates for all cars mean that cars are retired faster as their “useful” miles are consumed more quickly. As these older cars reach the end of their life faster, this allows for a more rapid introduction (and proliferation) of more efficient vehicles, including electric vehicles and hybrids.

Essentially, car sharing can lead to there being fewer older, emissions-heavy, less fuel-efficient cars models on the road, as owners will replace a shared car much sooner than they would one for personal use only. And, as the 2040 pledge begins to take effect, this will be happening even more quickly with the cars shared on Getaround.

Getaround’s commitment to the environment didn’t start with this week's announcement, nor will it wait until 2040 to come to fruition. Instead, it is the continuation of our more than decade-old founding principle to revolutionize vehicle usage and mobility for today’s drivers, while protecting the environment for future generations.

Learn more about sustainability at Getaround.

Get to know Getaround Power Hosts Adam and Sheri, learn how they’re helping guests get on the road across the Aloha State 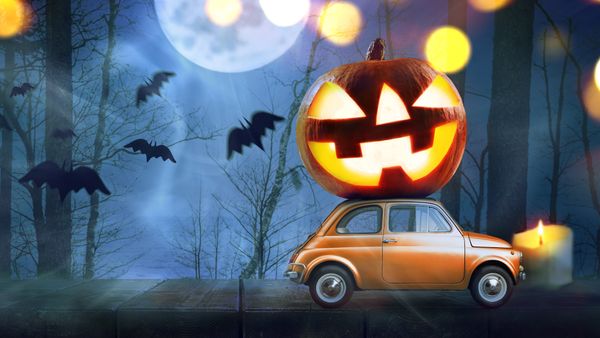 Spooky season is here at last — and all of our favorite ghosts, ghouls and monsters are preparing for their time to shine.

The Road Ahead | Getaround
—
Driving down emissions, doubling down on sustainability
Share this